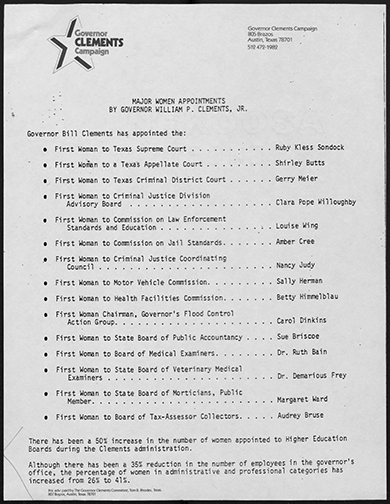 Under Texas' "plural executive" system—a legacy of Reconstruction—modern Texas governors have relatively limited institutional powers. Unlike the Lieutenant Governor and the Speaker of Texas, the Texas Governor has no direct control over the state's legislative and budgeting processes. And although governors have the power to block legislation, gubernatorial vetoes can be politically risky, as Bill Clements found out early in his first term. The majority of a Texas governor's power resides in what Teddy Roosevelt famously referred to as the "bully pulpit," i.e. the station and ability to powerfully advocate an agenda. But Texas governors have one other important power as well: appointments.

Over the course of a four-year term, Texas governors typically make around 3,000-4,000 appointments to various boards, commissions and agencies that oversee the daily operation of government. And while the Texas Senate must approve most gubernatorial appointees, the power of appointment gives Texas governors significant—albeit indirect—control over public policy. In keeping with the practices of his predecessors, Clements frequently used appointments as a form of patronage, both to reward his supporters and to establish a beachhead for Republicans among the ranks of Texas civil servants. Judicial vacancy appointments presented particularly strategic opportunities for Governor Clements and the Republican Party to make political inroads in rural Democratic strongholds. As with most matters political, Clements relied heavily on his wife's advice in the staffing of critical government posts. Clements was particularly interested in appointing highly capable people to positions of state leadership. By the end of his first term, he had appointed approximately 4,000 people to various government posts. Notably, Clements appointed more minorities and women to public posts during his first term than any of his predecessors—a fact he trumpeted frequently in order to improve his image among those constituencies.

If anything, appointments became an even higher priority for Clements during his second term. The second time around, his approach to selecting appointees also became more systematically partisan. According to Clements' Appointments Secretary James Huffines, Clements had come to view his appointees as among his most lasting gubernatorial legacies. He instructed Huffines to target a younger, more uniformly Republican demographic, who he hoped would remain in government long after Clements himself had exited the political scene. Ultimately, Clements made nearly 4,000 appointments in his second term as well, including several key positions on the Texas Supreme and Appellate Courts.