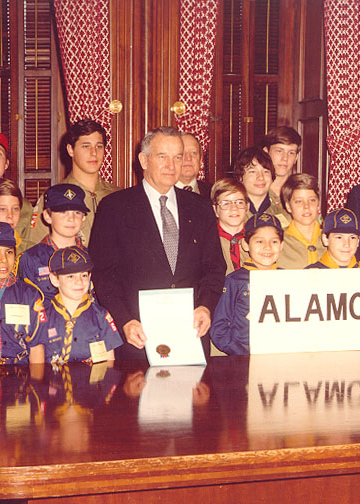 Bill Clements joined the Boy Scouts at 12 years old. It took him only 14 months to earn the rank of Eagle Scout—the highest in Scouting. Throughout his life, Clements insisted that Scouting had been integral to the development of his famous work ethic. After Clements became wealthy with the success of SEDCO, Boy Scouts became and remained one of his favorite charities. In 1968, Clements helped the Boy Scout troops of north and east Texas acquire the land for a scout camp, known as Camp Clements Scout Reservation. Through his work for the Boy Scouts, Clements honed his fundraising skills among the Dallas elite—skills that he would later deploy in the service of Republican politicians like George H.W. Bush, Richard Nixon, and eventually, himself. In the 1970s, Clements served on the National Board of the Boy Scouts of America, and funded his own college scholarship program for Eagle Scouts.