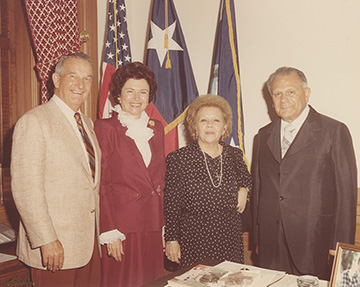 As a border governor, businessman, and conservative, William Clements hewed to his own line when it came to navigating the complexities surrounding immigration and national borders. Although certainly no progressive when it came to immigration, Clements' understood the issue in ways that Republican politicians from other parts of the country did not. He knew, for instance, how important migrant labor was to his state's economy. He knew as well that clamping down on the flow of undocumented workers across the US-Mexico border might allow labor unions to gain a foothold in Texas, a "right-to-work" state. Clements considered himself a leader on immigration within his party, and expected his voice to carry considerable weight on the issue.

Gov. Clements was hardly alone in his view that the federal immigration system--as it then existed--was essentially unworkable. But he was among the few with policy recommendations for national immigration reform--one that he hoped would enhance his stature as a national politician. In a nutshell, Clements' plan called for closer cooperation with Mexican authorities to develop a guest worker program, tracked by entrance and exit visas, which would furnish cheap labor for Texas farmers while protecting migrant workers from wage theft and physical abuse.

Although he strongly opposed what he called "wholesale amnesty," Clements did not regard migrant laborers as a threat to American workers. He criticized the periodic federal roundups of undocumented workers, and warned against instituting any guestworker program that might repeat the mistakes of the infamous Bracero Program, under which migrants were brought in under direct contract with their employers. He also opposed fining employers for hiring undocumented workers. Instead, Clements argued for a system under which the federal government guaranteed employers a steady supply of migrant labor, and employers paid an in-kind fee to repatriate the workers when their billets were up.

Disagreements with his own party over immigration ultimately led to a major break with President Reagan in 1981. He was particularly upset with the Reagan plan's provision for punishing employers for hiring undocumented workers.