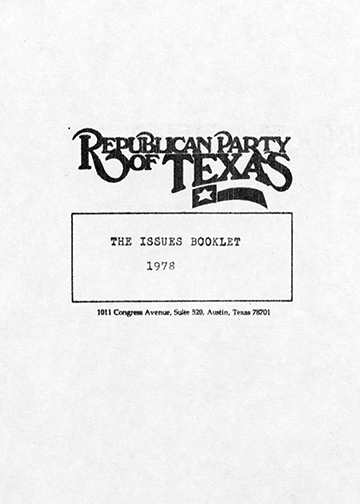 As the first Republican Governor of Texas in over one hundred years, Bill Clements instantly became a standard-bearer for his party—and not just in Texas. Having pulled off the seemingly impossible, many Republicans hoped that Bill Clements might single-handedly transform Texas into a battleground state. But with his rough edges, fierce pragmatism, and shoot-from-the-hip political style, Clements wasn't particularly suited to the role of transformational leader. As it turned out, the Republicans didn't really need him to play that role anyway. Structural changes in the Texas electorate, together with the national strength of the Reaganite conservative resurgence, were more than enough to keep Texas in play throughout the 1980s. As noted above however, through his thousands of appointments, Bill Clements played a large role in building up the machinery of the Republican Party through state patronage. His appointments placed his party in good position to dominate state politics in the decades to come. And as Karl Rove's first political client, Clements helped to develop the political talent that would take the Texas Republican Party all the way to the White House in 2000.